When Spring came, at first shyly and with few signs, I encountered Bride, the maiden aspect of Brighid. After the awesome power of the Cailleach, it was hard for me to even feel Bride's gentle force. She is like the faintest sigh of a breeze after a storm. She is the force that helps Life break out through the cold earth and through tough buds. She is the air current that holds up the hovering bird. Her power is more gentle but no weaker for it.

The Fire of Inspiriation

Bride (BREED) is the first morning of Spring. She is the Star of Hope for new beginnings. She is the tender green that graces trees early in the year. She is the feather-fingered maiden who brings the first light of the year and the first spark of inspiriation. She is the force of growth.

At Candlemas, the Cailleach sails out to an island off the coast of Scotland. Her course is steady and assured. Just before morning, her vessel reaches the island, and the Ancient Goddess walks to the Well at the centre. At the first light of dawn, the Cailleach drinks from the well and is transformed into Bride, the spirit of Spring.

Another story says that the Cailleach transforms into a rock in early Spring. Now Bride, who has been kept imprisoned in her cave, can come up from the cold earth and touch the Earth with her beauty. 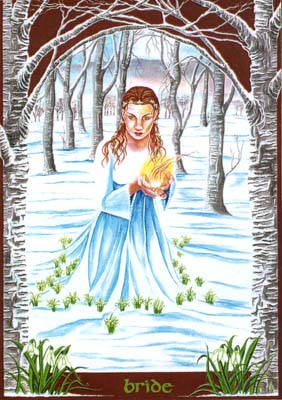 At this time of year, new green growth appears everywhere we care to look. The fresh new green of spring lifts our spirits. Soon the blackthorn marks the places where the Goddess has walked and later fruit trees blossom. Bride dances through the landscape and greenness grows wherever she passes. Life is shining out once more.

At Candlemas, on the very day for two years running now, the first snowdrops bloom in my garden. The snowdrop is Bride's sacred flower, and snowdrops are used to decorate the altar for the festival.

In Scotland Bride's day was celebrated with a feast following a procession when a dressed doll was taken around the village. Originally this was a sheaf of corn that was dressed in clothing like a doll. The "doll" was placed in a basket, Bride's bed. Candles were placed by the bed. At home, Bride's bed was made near the hearth and women would take a drink of milk and honey and make a wish. Men would then enter and ask for her help with their work in the coming year. The custom persisted for a long time in the Hebrides.

Bride is clearly identified with fertility returning to the land. She is the first enthusiastic rush of inspiration, the first attempt at a new project. She brings the first joy of creativity and a sense of play. Whenever I meet Bride in meditation, she leads me in a merry dance through the landscape. She is always witty and playful. 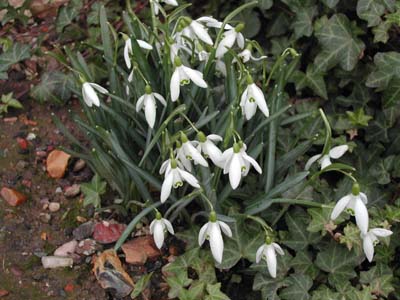 The snowdrop tells me much about Bride's power. It is frimly rooted with a heavy bulb in the dark earth. At the first lengthening of the days, the bulb sends out green shoots, with a flower bud at the centre. The shoots and the bud reach toward the light, until the bud bursts and a featherlight white flower opens. This very lightness is the power of Bride. It reminds us to stay rooted in the Earth, but to reach up as high as we can to see the interconnectedness of all things. We can reach higher to the practice of meditation and (after much training) of spirit flight.

The stories of St. Brigit's initiation, her taking holy orders, show how this Goddess is essentially virgin, whole unto herself. They also show the importance of seeing beyond duality. Bride shows us the way to spiritual practice.

My relationship with Bride feeds my spiritual practice and inspires my thinking and my writing. She is present at the start of every day and every new project. Bride's inspiration lives in all of us. Her light helps the seeds of new growth to germinate in us, so that our labours may be fruitful.