Brigit, both Goddess and Saint, has had countless sacred healing wells named after her. At first, Brigit appeared to me much like a goodly nun, a kind of spiritual grandma. Later she became one of my spirit allies. But this year she has shown herself as the ever-generous Goddess, who pours out her abundance upon the Earth until she is utterly spent. She is the point of full ripeness that is also the point of death. She is the healing power of the Sun reflected in the waters of the sacred well.

The Fire of Healing

Brigit is the ripeness of summer and the abundance of the Year’s harvest. Her power has ripened blackberries, apples and wheat. She gives everything she has to give, even in my garden. There are elderberries for our healing and for the pigeons, who revel in their juicy ripeness. There are cooking apples that get turned in to sauce and pie. There is a second flowering of roses and a reddening of rosehips. Brigit pours out her soloar energy to ripen the fruits of the Earth. Then she pours out fruit to feed the creatures of the Earth. And finally, in a flush of colour, she pours away her greenery to feed the Earth itself.

The stories of St. Brigit overflow with references to her abundance. She creates lakes of milk, mountains of butter, and enough beer to keep several communities from thirst. Here is just one example of her abundant outpouring: 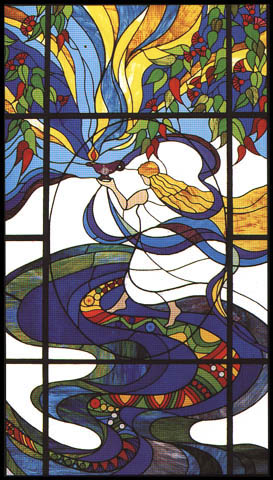 The Seven Bishops of Ireland came to Brigit in Kildare, and she didn’t have any food to give hem. She was embarassed to have nothing for her important guests, so she prayed hard to the Divine. Then angels came and told her to milk the cows for the third time that day ­ something that would not usually be very productive. So she milked them herself, and they filled the pails with the milk, and the whole of Leinster. And the milk overflowed the vessels till it made a lake that is called the Lake of Milk to this day.

But Brigit is most famous for her healing powers. At Kildare, where the saint’s monastery was, there is a well sacred to her. Springs have been sacred to the Celts since ancient times. This is a place where all the elements meet: water pours out of the earth, where it touches the air and catches the fire of the Sun. Natural springs are numinous places where Spirit is palpably present, where the outpouring of water meets the outpouring of the fire of the Sun. These are places where healing can take place.

I see healing as a much broader thing than curing illness. Healing is about being made whole, about the restoration of right relationships between our souls, our bodies, and all things on the Web of Life. Being whole and healthy is being in a place of peace with ourselves and our world, and letting the creative power of Spirit flow through us. Any physical illness has its spiritual side. Shamanic healing work treats the spiritual cause of the disease and supports physical healing. Brigit guides me when I do this work.

There are numerous accounts of people up to the recent past, who went to Brigit’s well and found healing. Brigit cures all kinds of illness: leprosy, blindness, ‘obsession’ by spirits, and a woman who had gone off sex. For all these people the Lady has a cure, a way to let their life force flow again. But her power reaches further. With her endless generosity, Brigit has the power to heal all disruptions in the Web of Life, in people, animals, in spirits of community and place.

In my recent meetings with her, she has shown herself as the light of the heavens ­ Sun, Moon and stars ­ reflected in the water. It is a beautiful image, and tells a lot about the guidance she is giving me: be receptive like the water and shine with the light of Spirit. I don’t have to hold on to myself for fear that I am somehow not acceptable. I can just let myself flow, and turst that my deepest self is like a quiet lake that reflects the light of Spirit that is also my light.

My relationship with Brigit feeds my healing work. With her help I have learned how to work with the spiritual side of illness and loss of power. Through her I still work on my own journey to wholeness. When I let go of fear and become aware of my connection to the life around me, she helps me shine.