As I started working with Brighid at the beginning of the Celtic Year at Hallowmas, the first aspect I encountered was her shadow side. Not exactly a comforting place to start. At the coldest time of the year, in the dead of winter, our central heating broke down, together with a few other things modern humans rely on. This challenge taught me how to rely on the Cailleach's elemental power.

The Cailleach (KAL-y-ach) is the Ancient Earth herself. She is the lichen-covered rocks and the mountain peaks. She is the bare earth covered with snow and frost. She is the Deep Ancestress, veiled by the passage of time.

At Hallowmas, Brighid withdraws her green mantle from the Earth. With a last stunning flourish of colour, her power withdraws into the ground. The very soil now holds all of Life. Plants have deposited their seeds there, to wait for the return of the light. Trees now only live in their roots, leaving their branches bare to the keen winds. Animals as small as insects and as large as bears go into the Earth to sleep the Winter away. The wet of the Winter rains helps last year's plants to transform into fertile soil for the next season of growth.

The Cailleach is the Goddess who oversees this transformation. She is the one who watches over the culling of old growth. She is the Death Goddess, who lets die what is no longer needed. But in the debris of the passing year, she also finds the gems, the seeds for the next season. She is the guardian of the seed, the keeper of the essential life force. She holds the very essence of power. 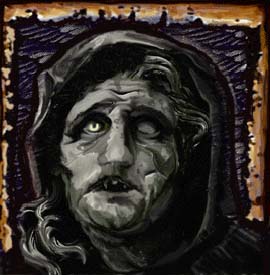 This is the hag of winter, often described as an ugly giantess leaping from mountaintop to mountaintop. The rocks she drops from her apron become hills. She has a blue-black face with only one eye in the centre of her forehead. Her teeth are red and her hair is matted brushwood covered with frost. She wears grey clothes and a great plaid is wrapped around her shoulders. When the Winter storms rage through the hills, people say the Cailleach is tramping her blankets. She washes her plaid in the eddies of the Corryvreckin off the Scottish coast, and the next day the hills are white with snow.

It is clear that the Cailleach is one with the land, clothed in snow in winter, with brushwood growing on her body. Her one eye shows that she sees beyond dualities to the ultimate unity of all things on the Web of Life.

Her appearance alone makes her awesome to encounter. It is hard to relate to someone that ugly. Whenever I encounter her in meditation, I feel fear and awe, because she is clearly very powerful. She is the essential power of the Earth, and she has made it clear to me that she will continue to punish our disrespect for her with flood and other natural disaster. This is not a lady to be trifled with.

My identity with the Goddess gives me Sovereignty in my life, a special kind of power and confidence. The Cailleach, fierce though she may be, lives in all of us. She gives us the wisdom to let go of what is no longer needed, and keeps the seeds of what is yet to come. She stands at the cusp of Death and Life.