This festival celebrates the sacred marriage of the male and female energies of Nature. The usual date is 1 May, when the Sun is in Taurus. May Day marks the turning point between Winter and Summer. It is similar in importance to Hallowmas.

Traditionally Witches celebrate the wedding of the Goddess and the God on this day. They usually see the Goddess as the fertile Earth and the God as the Sky Lord who makes her fruitful with the warm rays of the Sun. However, my patron Goddess Brighid is a solar deity, which turns things upside down a little. I call upon the Goddess as Brigantia, the Summer aspect of Brighid. She is the Sun who envelops the Earth in her warm mantle of sunlight. And I celebrate her wedding to the God Bres (BRESH), who taught the Tuatha de Dannan about agriculture, and as long as he lives nothing will be fallow.

Bres is a bit of a difficult character. In Irish mythology he is the husband of the Goddess Brighid, and King of the Tuatha de Dannan. But he is a bad and oppressive King. After he is deposed, the Tuatha only spare his life because he teaches them how to farm. I don't usually invoke a God for my rituals, mostly because I haven't yet met one I want to work with - or who wants to work with me. For the time being, I invite Bres to my May Day ritual to fulfil his function as Brighid's consort, and he doesn't seem to mind.

In this respect, I obviously still have some way to go. I am open to the possibility that I will one day find a male Deity who will act as a permanent companion to my patron Goddess, but I don't mind just working with Brighid on her own. However, on her wedding day she can hardly do without a consort.

Summer came early this year. We had many warm days in April, and the world was in full bloom and growth when May Day came. Here in the suburbs the hawthorn had been blooming for quite some time, while up on the Common there were still only buds. Many plants were blooming copiously though, or had already finished. They and the animals all around were conducting the sacred marriage each in their own way.

On May Day, we ask the Goddess and her consort to fertilise our work. It's already been six months since Hallowmas, so a lot of work has already been done. Now all I need is to call upon the power of my own Spirit, the fire within myself, to bring the work to fruition.

But May Day is primarily a celebration. It happens during the Wedding Moon (no co-incidence there) and the bright green of all the young growth around me just makes my heart soar. It gives me the urge to dance, and I just throw a party in the Circle.

A May Day Ritual

May Day corresponds to the South Eastern point of the Circle, and that is where I place my altar. On it are symbols for each of the Elements, together with a red candle that will serve as May Day fire, three coloured threads, and most importantly my ash wand. At the centre of the circle is my cauldron, filled with earth from my garden. 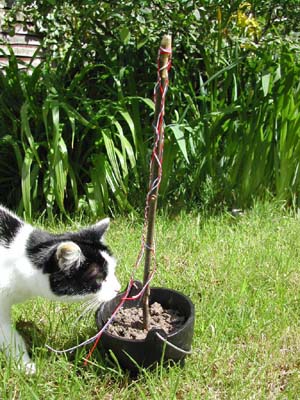 I cast the circle and invoke Brigantia, the Sun Goddess who envelops the Earth with her warmth, and Bres, her consort, who works the land. As soon as they have arrived, I light the red candle, the May Day fire. By its light, I do a divination, asking the Goddess what my task for the coming season will be. I meditate on the answer for a while, thinking what qualities I will need to fulfil that task.

I then raise energy with a chant appropriate to the season. I always use my wand to raise and direct energy, but at this time it has a different purpose as well. When power is at its peak, I plunge the wand tip first into the earth in my cauldron. The Lady and Lord's wedding is now official.

The threads are dedicated next. I set them aside for magic, associating each with one of the qualities I will need to progress with my work. While saying an appropriate spell, I weave them around the Maypole wand. I take time to visualise myself using those qualities, and them becoming more prominent in the world.

I have a party in the form of home made sugar bread and wine (not homemade by the way). To finish, I leaped over the May Day fire making a wish.

After thanking Brigantia and Bres, and the Quarter spirits, I go out and enjoy May Day.