The Full Moon of this time appears in the sign of Aquarius, with the Sun in Leo. During this Moon, we celebrate Lammas. In 2002 this Moon was followed by a Blue Moon.

After the climax of high summer, it is now time to take a step back and take some distance from our work. No wonder this is the traditional holiday season. After all those months of work on a project, it is time to rest. Time to let go of what we have been doing.

Sometimes letting go is hard. If we are really passionate about something, it can be hard to take a break from it. But it is essential for our health, and for our usefulness for our project, that we surrender control for a while and rest. When we return, we will be ready to dig deep and give the energy we have been withholding. We will be ready for a whole new kind of surrender.

It is astonishing how many signs of Autumn appear in August. Just like Spring shows its first face in January, high Summer brings the first signs of letting go. Seed pods and fruit replace flowers and green growth. Under trees you can find the first dead leaves, each an indication that the Year is on the wane. From now on, days will start to shorten perceptibly.

I started the Moon off with a little holiday in my mother's house in Belgium. The weather was so much warmer and more pleasant there than what we had left behind in England. The difference is rarely that great.

We had a very quiet time playing games, going out for meals and visiting family. Going to see the folks back home is always a kind of surrender for me. There is no way I can take my pet projects with me there. I have to just let go and allow my mother's very organised life to take over my creative chaos. It really works as a rest from the usual. 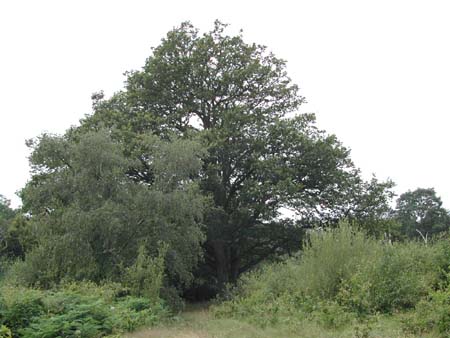 Another unusual thing was the Kroningsfeesten (Coronation festival) in my home town. The main church in Tongeren was the first church this side of the Alps to be dedicated to the Virgin Mary. In the middle ages this church and its miraculous Mary statue became a famous pilgrimage site. At the end of the 19th Century, interest in Mary was revived, and the statue was crowned. Since then, a huge procession has been held every seven years to commemorate the occasion. Thousands of people take part in a pageant that shows scenes from the life of Mary.

I have no real explanation as to why so many people are willing to give time, effort, and money to a religious festival in these times of crisis for Christianity. Perhaps it is just local custom that gives the impetus. Or perhaps the Goddess is making her presence felt in the shape of Mary also. 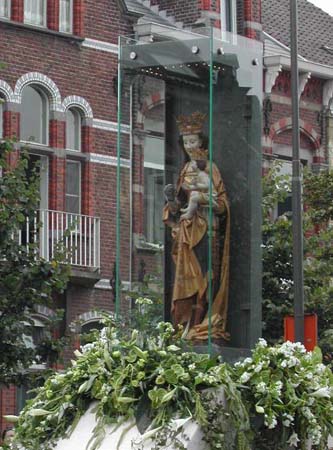 Every Moon has its own Surrender Tide, when the Moon becomes begins to visibly wane. You can see the disseminating Moon mid evening until mid morning.

This, too, is a time to let go and take stock. It is wise to take a moment and reflect on how things are going. Is there any room for improvement? At this time, I often look over old lessons I have taught and try to liven them up a little.

In the Surrender Tide of life, people begin to feel their own mortality. Between the ages of 47 and 53, many get a sense of unease. They look back over their lives and notice a lot of lost opportunities. It is a good idea to take some time off now, to go and do some of the things you didn't get round to earlier in life. But as we all know, recklessly throwing all you have built overboard and starting from scratch may not be so wise an idea after all.

It was cold and very, very wet a lot of the time. This year, Summer came in April, and I'm expecting some more in October. It got so wet that a few towns in England flooded, and flood warnings were issued for at least a week. The weather improved a little after Lammas. There were more sunny days and it stopped raining so much. Blessed relief. We even had a week of summer weather late in July.

Working with Brigantia was still very exciting. She is such a powerful lady. But I had to say goodbye to her for now. At Lammas I invoked Brigit for the first time, the Autumn aspect of Brighid. She appeared as a friendly grandmother figure. She was very kind, if a bit formal. I look forward to getting to know her better.